The existence of life on Earth requires just the right amount of elements and compounds at just the right timing since the big bang. Earth is remarkably unusual among planets in that it has an abundance of nearly every element available in addition to life essential compounds. That taken together with it's perfect location for life and other factors such as the unique requirement of a moon of just the right size and the existence of protective gas giant outer planets make it a wonder to comprehend.

All of the heavy elements on Earth, heavier than hydrogen and helium, including the very metals in our bodies were formed in the core of exploding stars (supernovae) or colliding neutron stars in the past. The timing in 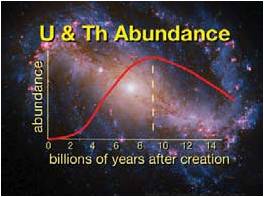 all this is essential. It is well known that plate tectonics is vital for a life bearing planet like Earth,  as this tills the crust and stimulates photosynthesis. Plate tectonics is driven by the heat released from radioactive thorium and uranium isotopes in the Earth's mantle, and these elements are generated by exploding stars. However, after a certain age the abundance of these isotopes declines, as the delivery rate from supernovae in a declining population of stars can't keep pace with the rate at which these isotopes decay. The peak abundance of radioactive thorium and uranium occurred right at the time when the solar system formed, about 4.6 billion years ago.

The presence of all the other elements required the eruption of 2 different types of supernovae at just the right distance from the solar system. Too close and the delicate balance of the solar system would have been destroyed. Too far and the necessary elements would not have reached the solar system in sufficient quantities. In addition an abundance of radioactive Aluminum 26 was necessary for the formation of a life bearing solar system. The heat generated from an abundance of aluminum 26 drove off lethal excesses of water and carbon dioxide in the early solar system, so that just the right balance of these volatiles could be achieved. What is remarkable here is that the aluminum 26 came from the solar winds from massive unusual stars in a cluster around the sun. When the aluminum 26 had been acquired, the solar system had to be ejected from this cluster as the presence of these nearby stars would have made a stable life bearing solar system impossible. Our hospitable solar system came about by a remarkable sequence of unusual events at exactly the right time. It now exists with a single star which itself is another unusual feature as most systems have 2 or more stars in complex orbits which again prohibits the formation of life.

Father God, thank you for the marvelous journey of the formation of the solar system and ultimately of life itself. Thank you for the first creation when you said "Fiat Lux" - let there be light and the universe was born. Again Lord you uttered an eternal Fiat - "let it be" when you entered into creation to redeem it and elevate it, through humanity, to the level of a new creation, a new Heavens and a new Earth. This you did by entering into our world so that we could enter into yours, through the incarnation death and resurrection of the God-man, Jesus Christ. You became man so that man could become God by a gifted sharing in your Divinity.

Lord, the elements of the Earth and our own bodies were forged in the heart of a dying star which breathed it's elements into space to bring life. The redemption of our eternal souls was forged in the heart of your dying son. Who breathed forth his Spirit to bring eternal life. What have we done with this second gift, so much greater than the first. Even now the elements of our salvation are present to us through hearing your Word, through your indwelling presence, through the sacraments of the Church, through prayer. These can lay dormant or they can become life giving. This time it is not you Lord who must choose. It is us who must choose - to say yes to eternal life, so that these elements may become the principle of a new life within us. You created us without our consent, but you will redeem us only with our consent.